1) As you pointed out, there's oil residue on the valve cover gasket bolt. It's possible the previous owner who replaced the valve cover gasket did not replace the gasket around the bolts.
2) You have a fairly significant oil leak as evident by the oil residue on your sway bar. Since there doesn't look like an oil trail from the valve cover gasket bolt down the front of the engine, I'm thinking the oil leak you have below is either from a ruptured CCV system or oil filter housing gasket leak. This oil residue is likely not from a leaking valve cover gasket as it's on the wrong side of the engine.
3) As pointed out previously, you have a cracked oil filler cap.
4) Looks like someone may have replaced your oil pan gasket previously. Whoever did it liberally smeared RTV (?) during the installation. I would keep on eye on this as this tells me the person who did the work was sloppy. OR perhaps your oil pan gasket was NOT replaced but the previous owner smeared RTV in an attempt to seal an oil leak. Do you know if the previous owner replaced the oil pan gasket?

I suggest you check for vacuum leaks using a smoke testing to see if the cracked oil filler cap is leaking vacuum and to ascertain the health of your CCV system. As noted previously, remove the valve cover gasket nut and if the gaskets are hard, then just replace them assuming the previous owner did not replace them. I would check around the oil filter housing to see if the oil filter housing gasket is leaking or not. I suggest you find out the health/status of your oil pan gasket.

ZiprHead said:
Do you happen to have a part number for those rubber grommets? I have a slight leak showing on the top of the valve cover in the same area as the OP.

ETA: Never mind. I see they come with the VCG kit. How about this: Anyone know the ID/OD of those washers. I should be able to get them in most hardware store plumbing departments.
Click to expand...

Those washers are shaped and not flat so not easy to buy from common auto parts store. They are 39 cents each from FCP Euro........
K

kaboom28 said:
Those washers are shaped and not flat so not easy to buy from common auto parts store. They are 39 cents each from FCP Euro........
Click to expand... 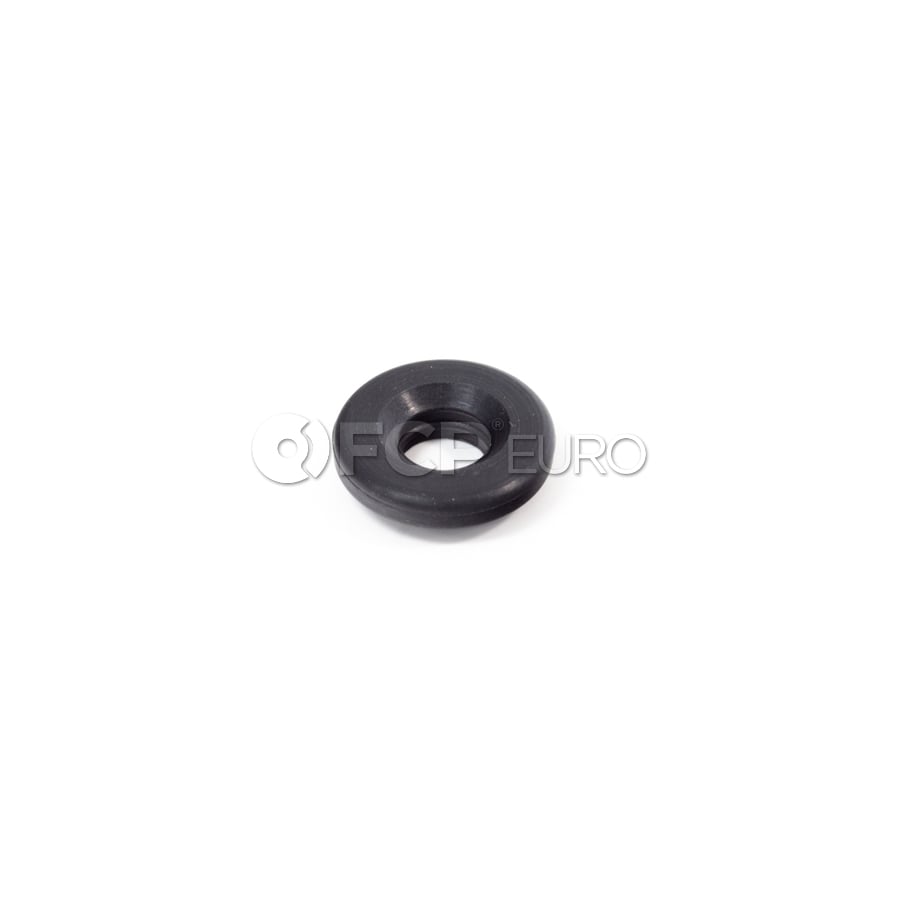 bim46life said:
[Update]
It does appear that I have multiple disasters and not just one.

I did take of that valve cover bolt and there was oil underneath it. I cleaned it up and put it back in. The valve cover is the least of my concerns now since I don't visibility see any oil leaking down the block.

The oil on the bottom of the engine appears to be a leak from a different area.


NEW CONCERN
I noticed the car leaking oil towards the back of the engine (behind the oil drain plug). This fluid doesn’t smell like motor oil and looks slightly redish (i’ll include a video)video. I am worried that my transmission is also leaking fluid. Are these cars known for transmission leaks?
Click to expand...

How did you perform the smoke test?

Looking at your video, the leak is too far forward of the transmission. Typically fluid leaks end up further back of the car since wind and air flow under the car tend to push the leaks further back when the car is moving. My suspicion that your oil pan gasket is leaking or you have a power steering fluid leak. I think the RTV on the oil pan is an alarming indication.

bim46life said:
It was my first time ever smoke testing a car. with a DIY smoke tester I saw one of the guys create on these forums. I mean I did the test twice and the intake system seemed to be holding pressure well and no visible smoke leaking from anywhere. I will recheck my CCV system just to be safe tho.
It is most likely my oil pan that is leaking. I will be attempting to change the gasket on that.
My car is a 2003 330ci Auto. I took a look at my power steering reservoir, levels seem fine and the fluid was brown with a slight burnt smell to it. The fluid that is leaking under the car seems more viscus and doesn’t really have a smell? again I don’t really know what transmission fluid smells like but all i'm worried about is transmission leaks.
Click to expand...

Can you briefly describe your smoke tester and your procedure?

What you can do is clean up under the car as best as possible, then add some dye to your engine oil and check to see if where the leak may be coming from. If I were you, I would be prepared to replace the oil pan gasket as the evident is strong that you have a leaking oil pan gasket.

For your power steering, you should check the two hose connections under the reservoir and where they connect on the other end. The high pressure hose from the pump is known to weep. Check all connections to the power steering pump and rack.

The power steering fluid in your car is actually ATF. Clean ATF is reddish in color and has a different smell than motor oil. However, it's harder to differentiate used ATF from used motor oil by color. It's still usually possible to differentiate by smell though.

I can understand your worries about a transmission leak. Why don't you check the transmission fluid level? It's a pain in the butt, but if it would make you feel better, go for it.
K

bim46life said:
This video shows the method i used to smoke test my car: Click here

I will definitely use the dye to see where the leaks are coming from.

yeah power steering fluid in my reservoir is brown but it definitely smells different than motor oil. The confusing part is that the oil leaking under the car has no smell at all which is making it difficult to pinpoint what is leaking.
Click to expand...

Seems lot of people use this method, but personally I'm not a big fan of the cigar/hand pump method. But if that's all you got, it's better than nothing.