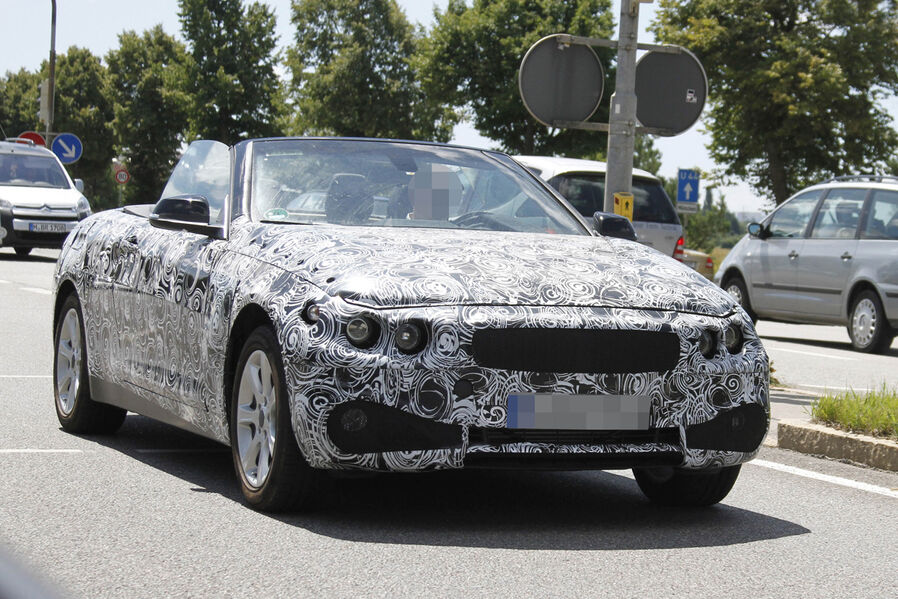 BMW continues testing the F33 convertible. The 3 series convertible in the F3x chassis line up has been renamed the 4 series for both the folding hard top convertible and the fixed roof coupe. The 4 door F30 sedan and F31 sport wagon retain the 3 series naming. Naming changes aside the F33 will share much visually with the F30 sedan, including the wide fender to grill headlights and swooping hood design.

Borrowing from its predecessor the E93 the F33 4 series convertible has a three piece aluminum folding hard top that stows neatly in the trunk. The F32 and F33 will grow several inches over the outgoing E92 and E93 so expect an increase in trunk space for the convertible, even with the top down.

We are still at least 12 months from seeing the coupe and convertible from BMW but the camouflage will continue to drop off the test mules as we get closer to the final reveal. Stay tuned for more spy pictures as we capture them. Does anyone have an F33 convertible in their future?
1 - 1 of 1 Posts
Join the discussion
Continue with Facebook
Continue with Google
or sign up with email
About this Discussion
0 Replies
1 Participant
Last post:
tim330i Jul 27, 2012
E46 Fanatics Forum
A forum community dedicated to BMW E46, E90, and F30 owners and enthusiasts. Come join the discussion about M performance, turbo kits, engine swaps, builds, modifications, classifieds, troubleshooting, maintenance, and more!
Full Forum Listing
Explore Our Forums
General E46 Forum The Showroom California ///M3 Forum Wheels and Tires
Recommended Communities