So - to sum everything up a couple of months back I had an accident moving about 50 or so in the rain through a curve and hit the curb. The impact was on the left side of the car which resulted in replacements for:

Following so, I went to get a four-wheel alignment and to my dismay the shop found themselves unable to do much adjustment at all.

After a tow trip for the car and about a week or two later I had all the items replaced and back on the road, the misalignment was definitely still there so it was time to take a trip back up to the tire shop.

After about three hours of waiting bad news came back that they were able to do just a bit of moving but 'something was bent' and they weren't sure what it was.
The technician at the shop said that the main problem is really my front right side (which the inside of my tires are definitely showing).

After a brief visual inspection the main components seem to be in-tact and I'm not sure what could be the problem here. :drool:

I've done a bit of tugging on the sway bar to see if it's just bushings going bad but everything feels stiff. Furthermore, when I'm driving although I'm getting a pull to the right, and really bad shaking at 40+mph the suspension still feels firm and planted but I haven't taken it up on the highway to be safe.

I was curious what you guys think that my problem could be? I'm super confused because the impact was literally on the opposite side. :hmm:

I've attached a copy of the specs from the alignment machine the shop used, besides that I've got a video to show you guys what I'm hearing from inside the cabin.

I'm hoping that it's really something simple like going ahead and picking up a new set of tie rods, but they look good to me?? :banghead:

I'd greatly appreciate any kind of insight or perhaps some good recommendations. I want to exercise some of my options before I throw in the towel.

If there's any other ways that I can make it easier to understand definitely ask me a question - all the help is appreciated! :clap: 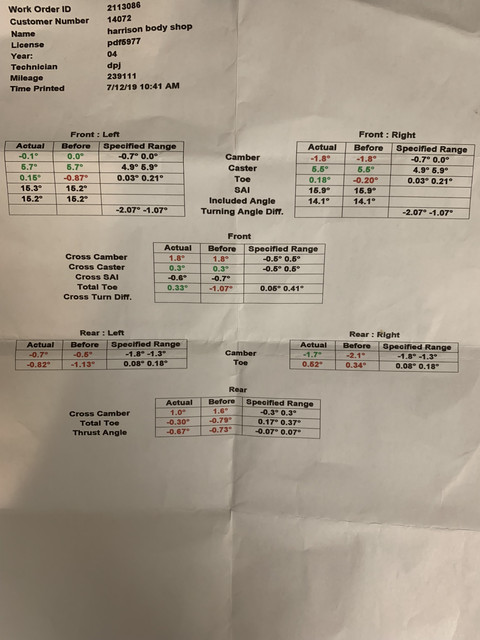 Joined Jul 7, 2012
·
2,230 Posts
Not sure what part of NC you reside in. EuroEnvy in Concord, is a BMW specific shop with an alignment rack in house. They're enthusiasts and know the cars inside and out. They will be able to diagnose it, and fix it if you so chose.

I'm not qualified, but normally you would replace both sides of your steering/suspension components, as the old rubber bushings and wear parts are worn out, unless they've been replaced recently.
If your paying someone else to do it, it's going to get expensive fast.

It's not technically hard with the DIY documentation on this site, and a set of basic tools. I refurbished mine with no previous experience. Just this site and YouTube.

DEADF15H said:
Not sure what part of NC you reside in. EuroEnvy in Concord, is a BMW specific shop with an alignment rack in house. They're enthusiasts and know the cars inside and out. They will be able to diagnose it, and fix it if you so chose.
Click to expand...

Much appreciated. I'm actually in Greensboro about an 1-2hr distance for me more or less.

I definitely have been reading that it's best that a BMW certified shop do the alignment, something about the procedures being different or something.

I'll definitely keep them on a list in case push comes to shove.

Fingers crossed that I can get a good it lifted up a higher actually up on a machine for a while and check the frame.

Inspection/ registration definitely due and it ain't ready :rofl:
R

So, post-revival from said shop I decided to go ahead and purchase some new tires for the rear - big improvement but definitely still a risk. Per advice from my grandfather we took it to another shop in-town with a better *communicating* relationship :thanks: (@DEADF15H Appreciate the recommendation, I def. followed em' on Instagram) and they had no problem making their adjustments - however they pointed out that before even touching the rear end we would need to source a replacement for the "trailing arm" because not only was it cracked but it was slightly bent out of shape. :thumbdwn:

So, from there I poked around online and nearby our parts suppliers either didn't have or know what I was talking about.. :argue: There was success at our local LKQ Pull-Your-Part but after getting it home, I realized that my 330 axle/spindle was bigger.. as was the trailing arm.:banghead: I made a return to LKQ with no problem and after going back and forth through maybe 3-4 "sellers" (with bad response/communication) I decided to refer to the BMW CCA (Tar heel Region) Facebook Group.:idea:
I got pointed in the direction to someone about 50 minutes or so away who hooked me up with one the right fit. :thumbsup: I hightailed back home and got everything put together the next day to get it back into the alignment shop as early as possible. So, a couple hours later I get the notice to come pick it up and they explain that they were able to get the back into spec for sure, but up front the camber was still just a bit off and it was likely that the struts may be bent as well. :eeps:

So, pulling off I was in a mixed emotion of achievement because it was a night and day difference from before, but there definitely was some of the rough handle on the roadway at high speed - not enough to make you nervous (like you'd lose control), but a passenger will definitely feel the rockiness. Granted - I was back feeling confident enough to do 100+/- in the AM without being too worried.. So I knew it was some progression.

Now, I'm back with details from this alignment because I'm deciding whether to simply enough replace the front-struts, and the strut mounts (along with spark plugs, and a new oil pan gasket/ valve cover gasket for the new year) :idea: or instead go with an adjustable coilover kit online/ try and score one from someone generous for a fair price.

Honestly, my preference is to just do the struts and mounts - I'm a very relaxed driver (prolly stoned enjoying the birds and the clouds, and the leaves..) so the soft/ comfortable but solid stock feeling is what I like - I'm hearing that opting for the coilovers will be considerably more firm and "responsive" to bumps and textures, but quality if you don't mind spending a little extra. As for the more "economic options" (ex: maxpeedingrods) you're looking at needing spinal surgery soon cause either the whiplash or cause they'll fail on you.

Anyways - here's the image of my specs after the alignment.. 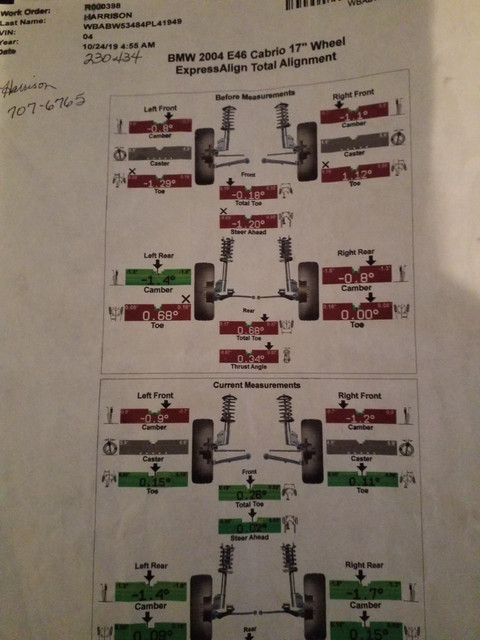 ​
Just to clarify - we're at the "Current Measurements"