Another wagon, another build thread 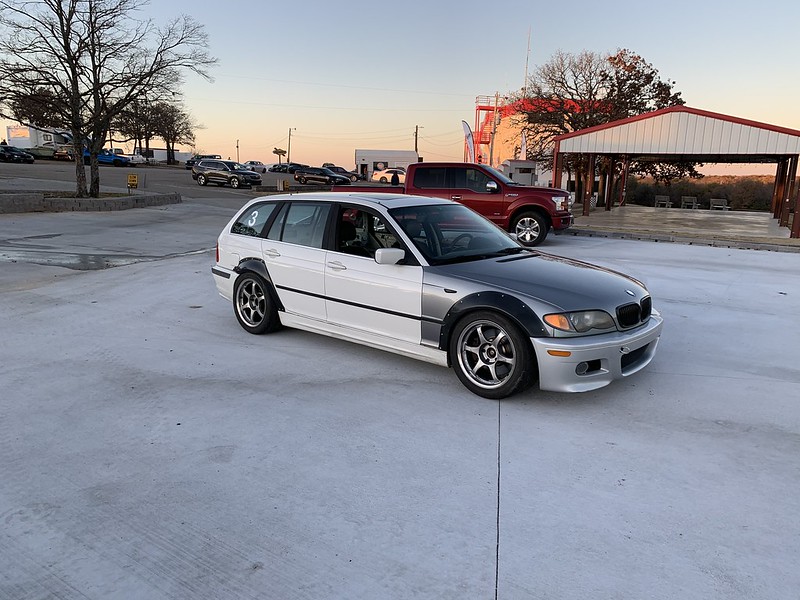 I have been working on this car for a few months now and just did my first HPDE at Hallett Motor Racing Circuit with the BMW CCA last weekend. Now that she has an event under her belt I thought it was only fitting to put together an individual build thread.

I picked her up in south Austin crashed in the front end and sitting for a few months, I paid $700. The owner had previously spent a bunch of money in their ownership including replacing an engine from an overheat. So when the car was crashed they were quick to turn it off. They then tried to start it to drive off the road and it wouldn't stay running so once towed home she sat like that for months before I came along. I got the hood open and determined the intake hose had simply popped off the MAF. Once reconnected she fired right up and I drove onto the trailer. 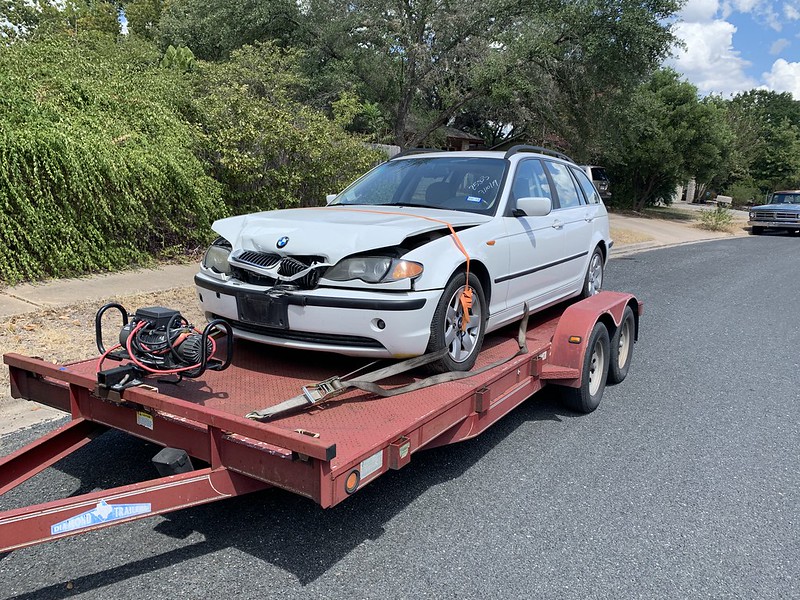 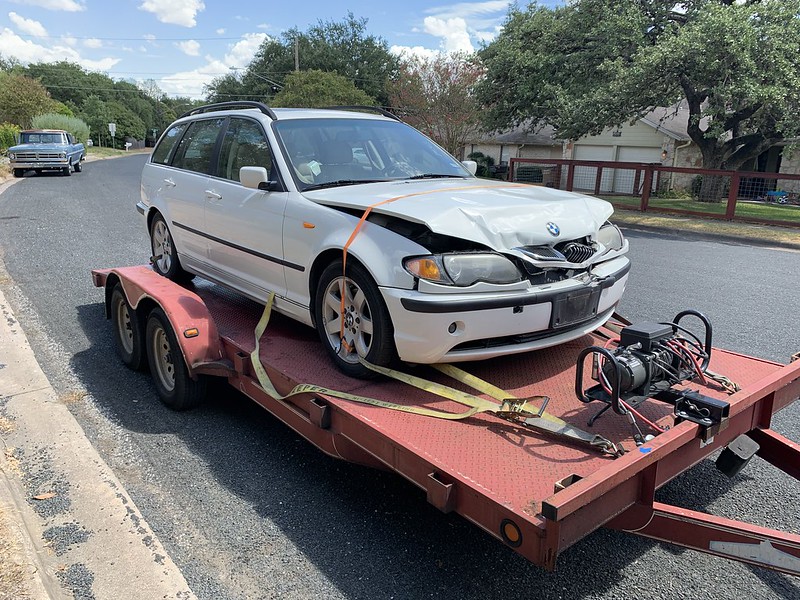 Once home I started inspecting for damage, it was actually quite minor mechanically. The only real damage was to the expansion tank. Otherwise the A/C was still charged and the radiator was intact. 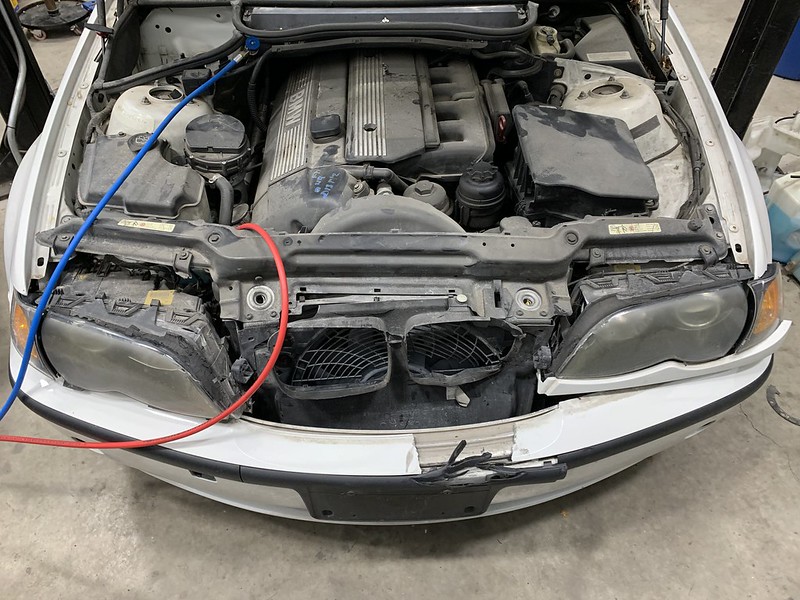 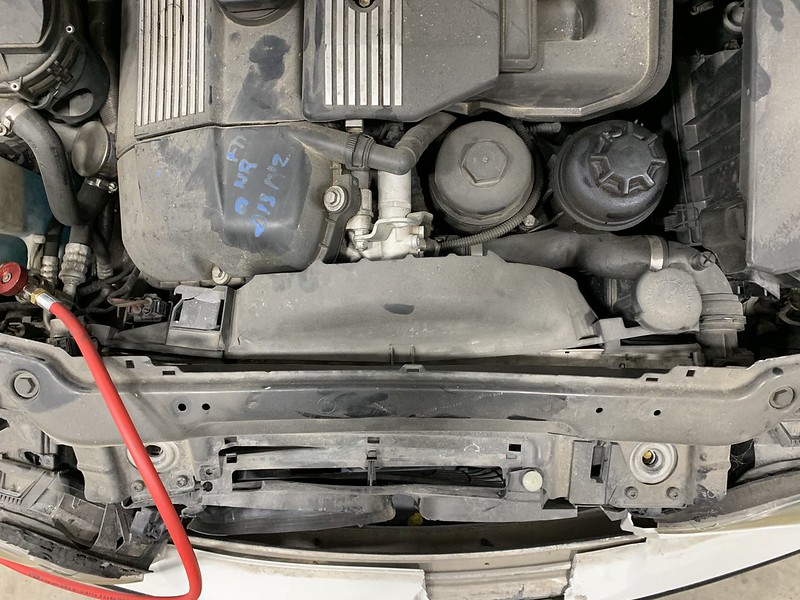 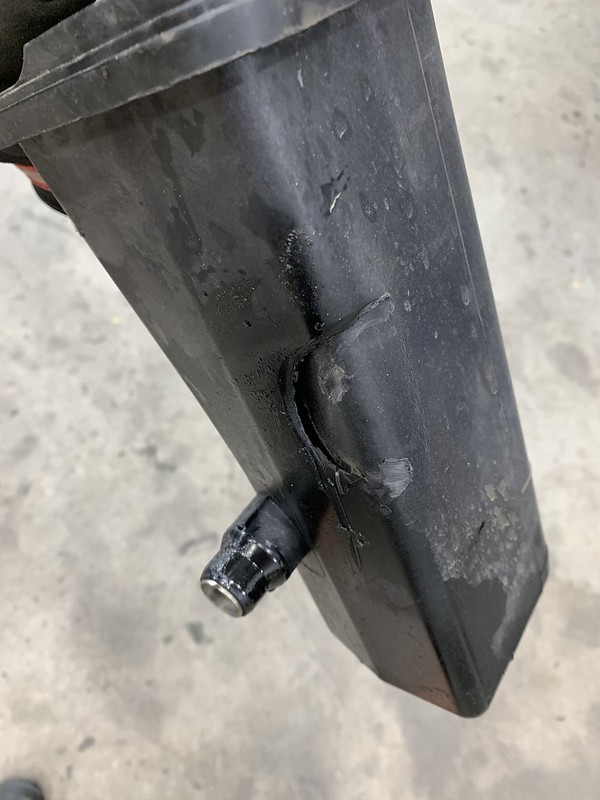 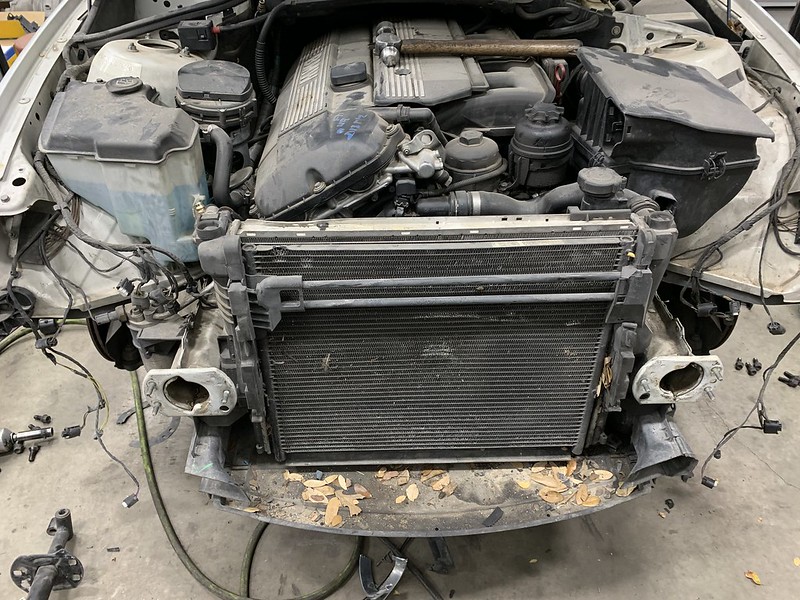 I bought a 330 sedan a while back because it had a set of HARD MS fender flares and Megan Racing coilovers on it. I sold the coilovers and ended up with a nearly complete car and the fender flares for less than my cost on the flares new. So I grabbed the core support, fenders and hood from that car and swapped them to the wagon. 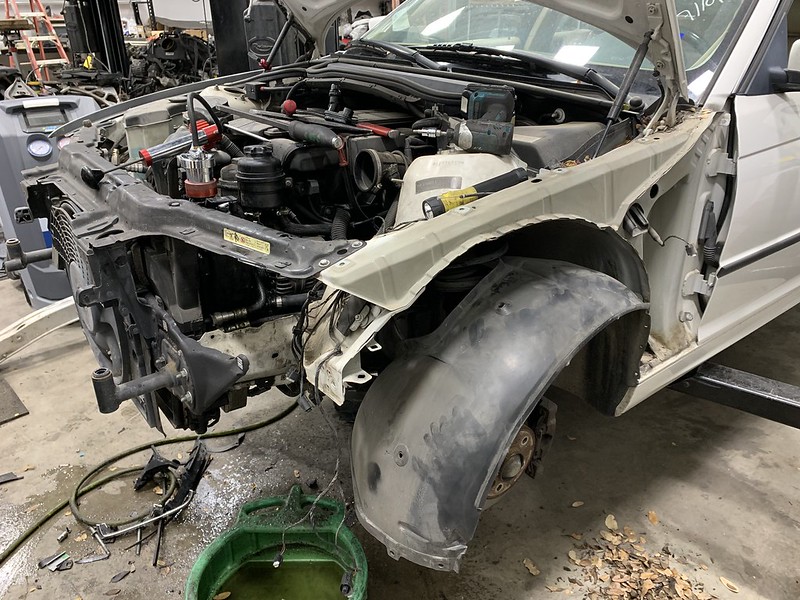 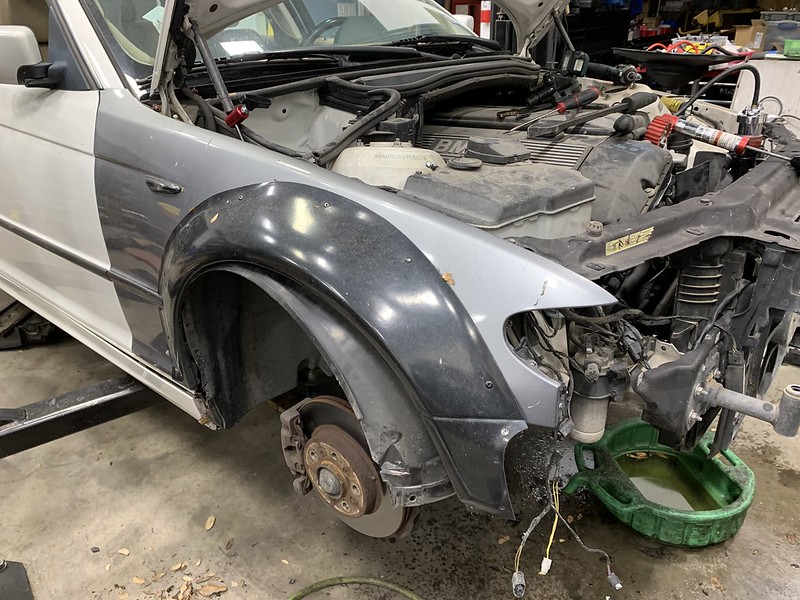 That sedan also had a replica M3 bumper. I initially mounted it up, but wasn't happy with how it fit so I ended up swapping it for an old M3 bumper that I had from a previous part out. 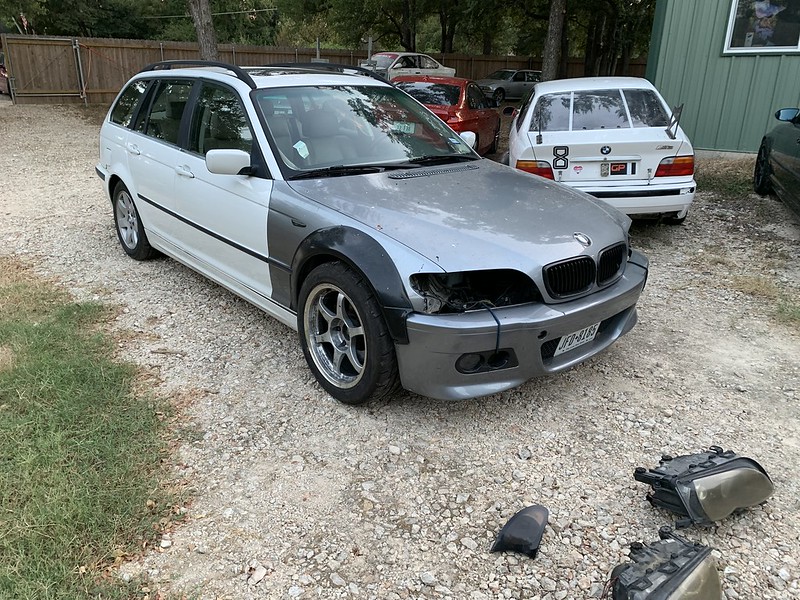 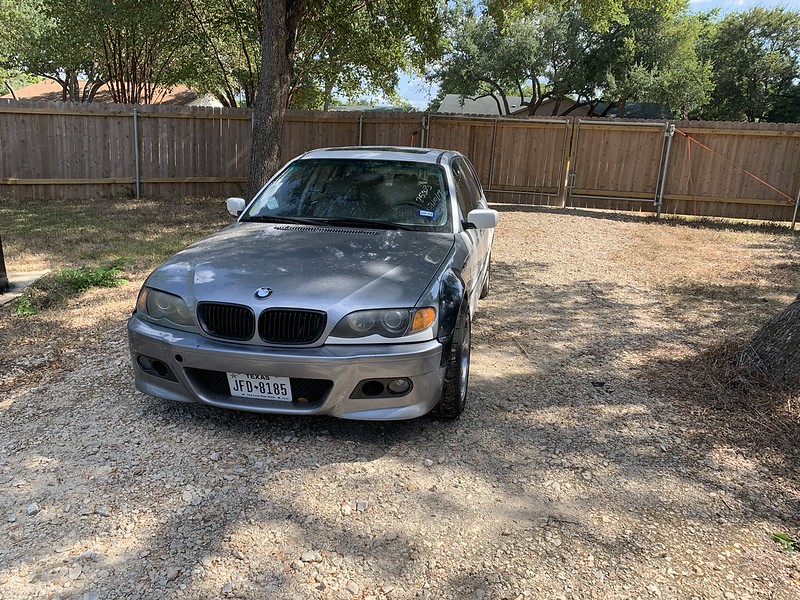 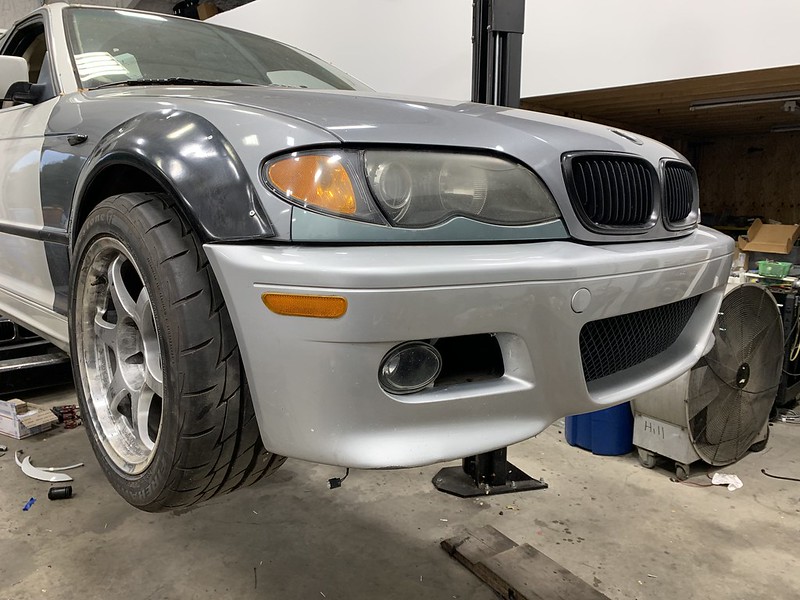 I then installed a spare rear 325 suspension that I had laying around, it has a TMS 3.46 gear LSD, poly subframe bushings, SPC/Eibach LCAs and then I added the Sycro Design Works RTA ball joints. While in the suspension I went ahead and converted the front and rear brake calipers/rotors to 330 parts. 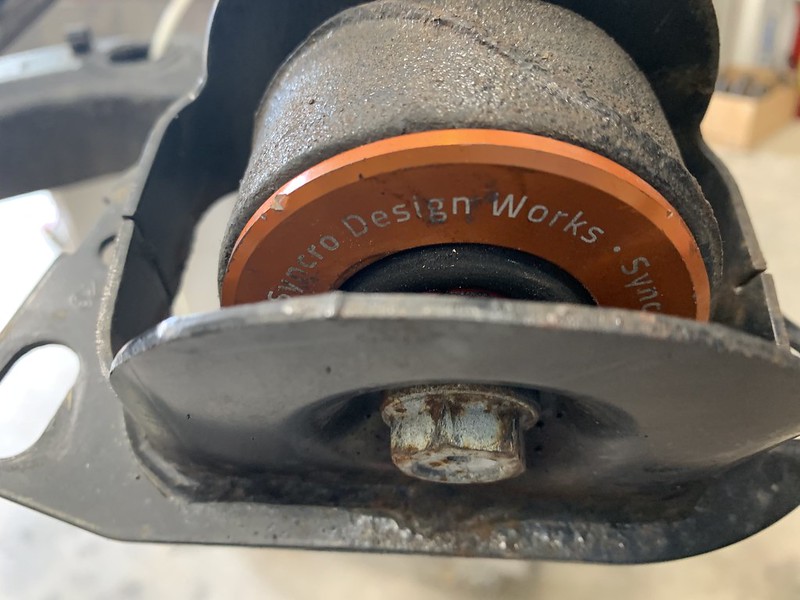 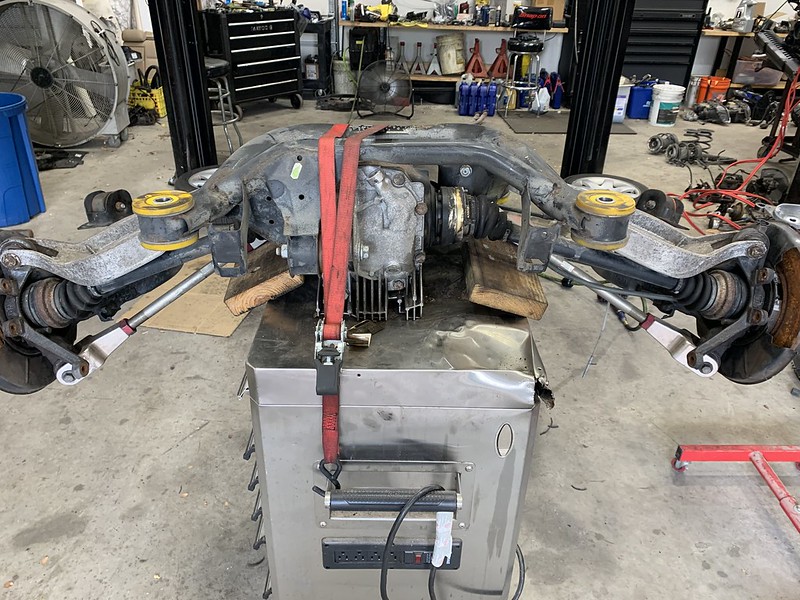 After that I refitted the front fender flares and added the rears which required major cutting. Then installed the 17x10s with 275/40/17s. 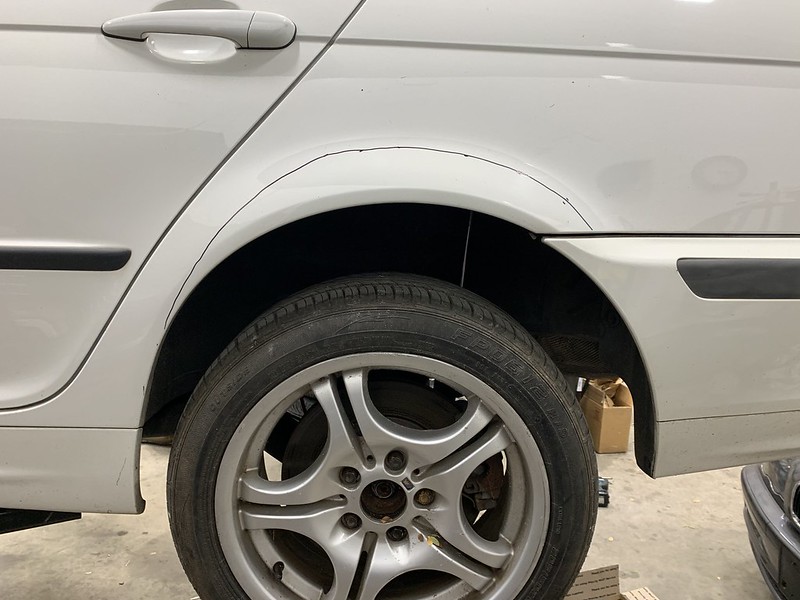 (This is full stuff without a bumpstop) 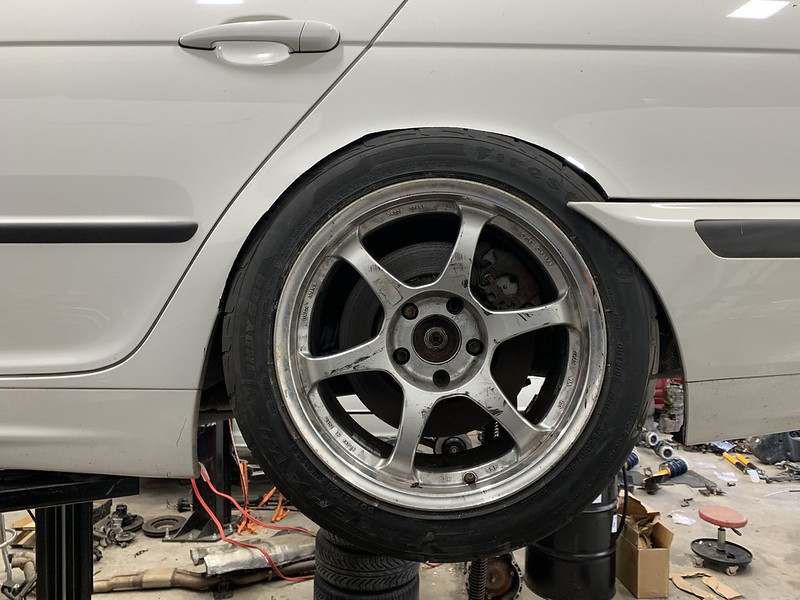 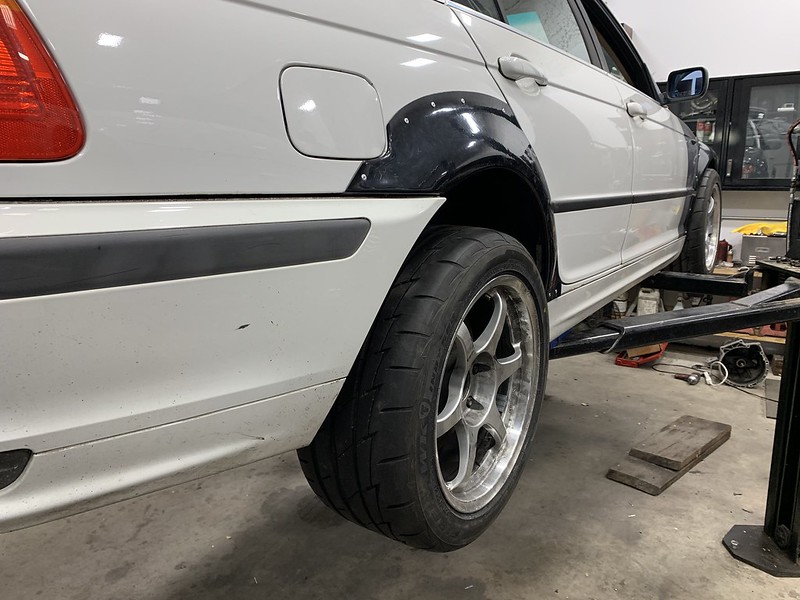 Next up was the 5spd conversion, I had a getrag setup kicking around so I swapped that in and junked the auto trans. Found this short throw shifter in a pile, anyone know what it is? 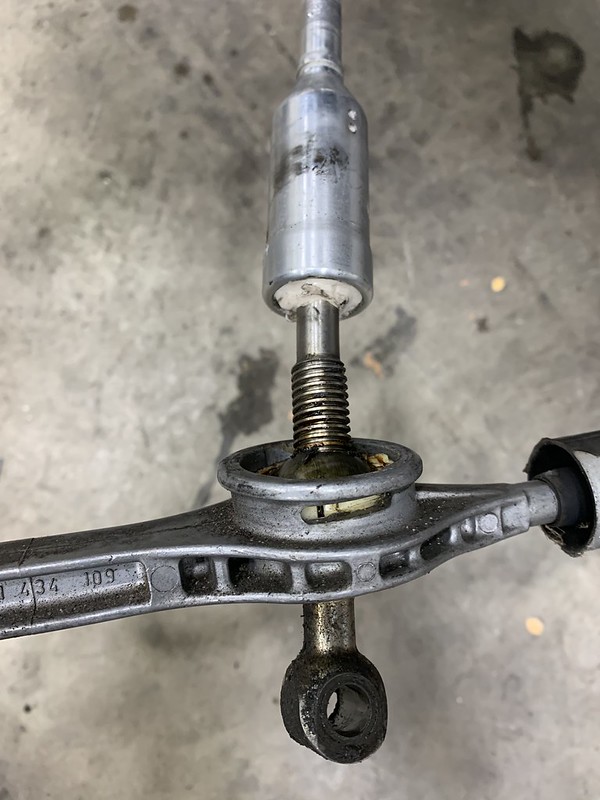 I wasn't planning to gut the interior right away but once I noticed the carpet was wet the decision was made. I also took the time to swap in a spare black dash and black M3 seats. 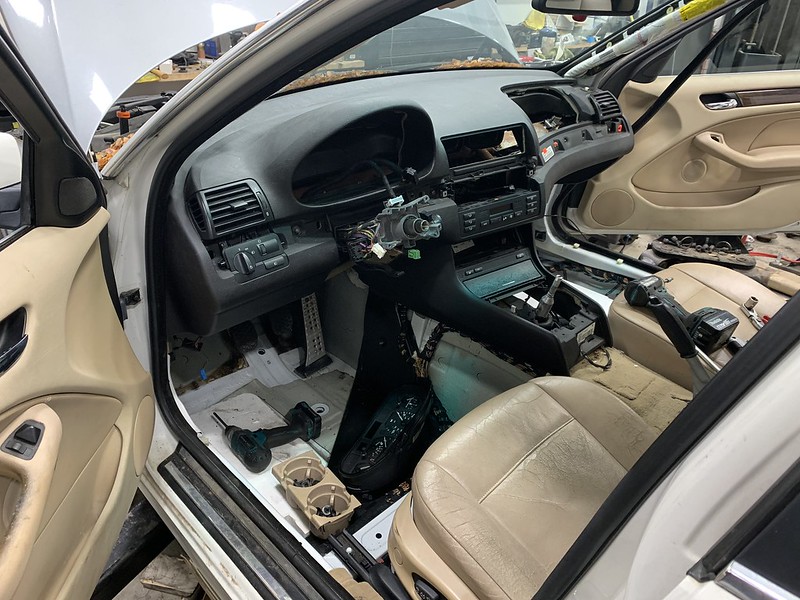 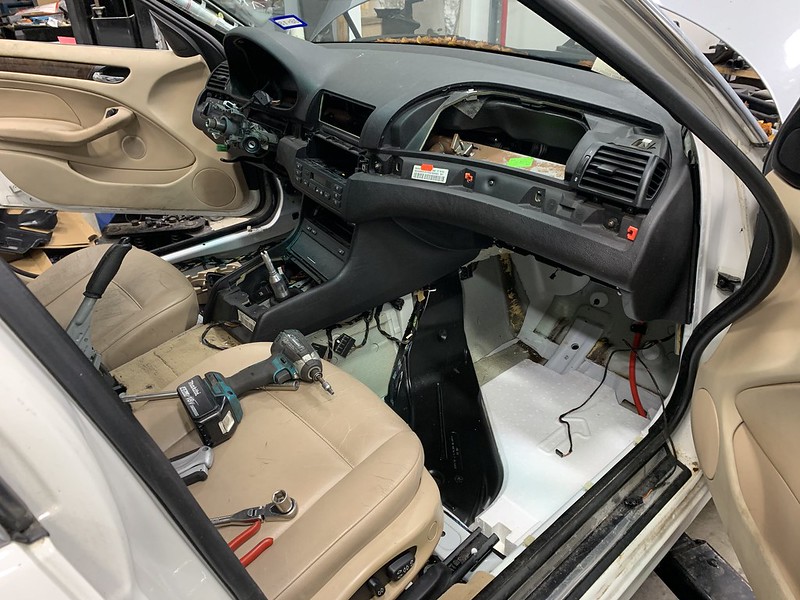 Next was the shocks and struts. I pieced together a kit with some friends help which included Koni yellows, GC coilover conversion, GC camber plates and Eibach springs. 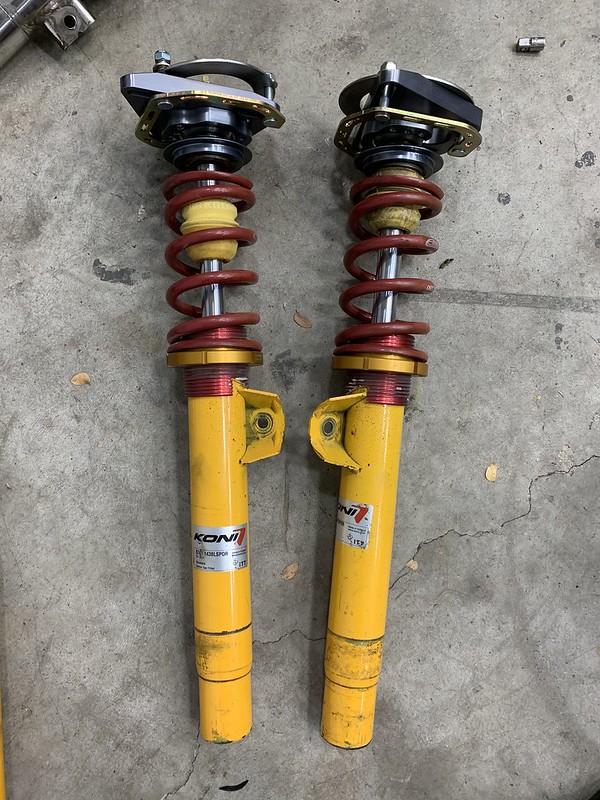 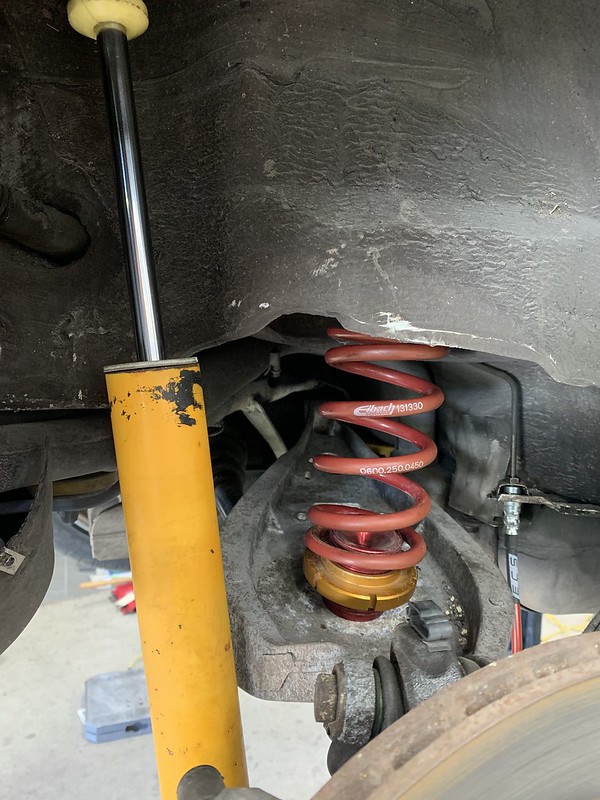 Clearance with the strut tower becomes an issue at extreme camber angles so that had to be modified as well. 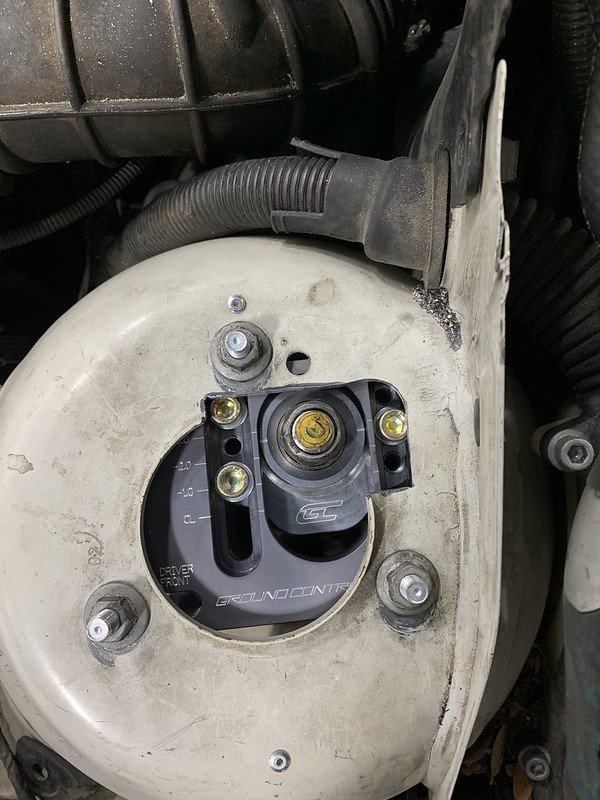 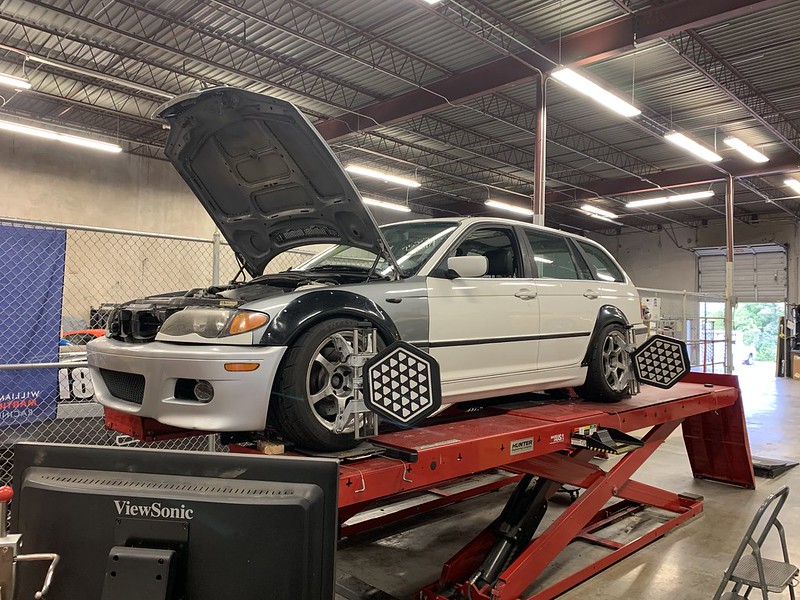 And followed that up will pulling more weight out of the car and this is where she is at now with a half tank. There is still an easy 150-200lbs to come out of the car, but I ran out of time before my event. *Actually the car weighs 3000# now but only have a pic with the scale at 3052 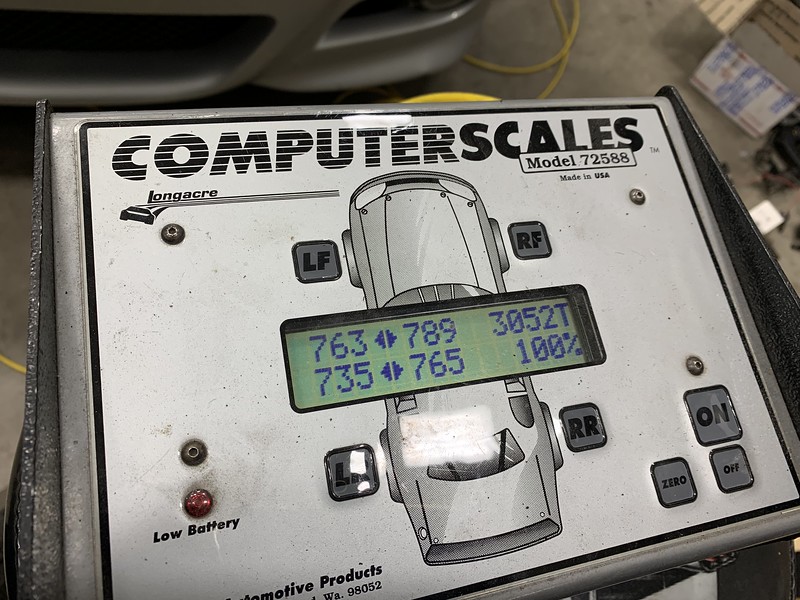 Did a ton of maintenance, gaskets, pulleys, hoses, etc and loaded her up with only having been driven 75 miles. Drove the rig 450 miles one way and hit the track. To say I was nervous was an understatement. But the little car didn't miss a beat and surprised just about everyone out there including me. 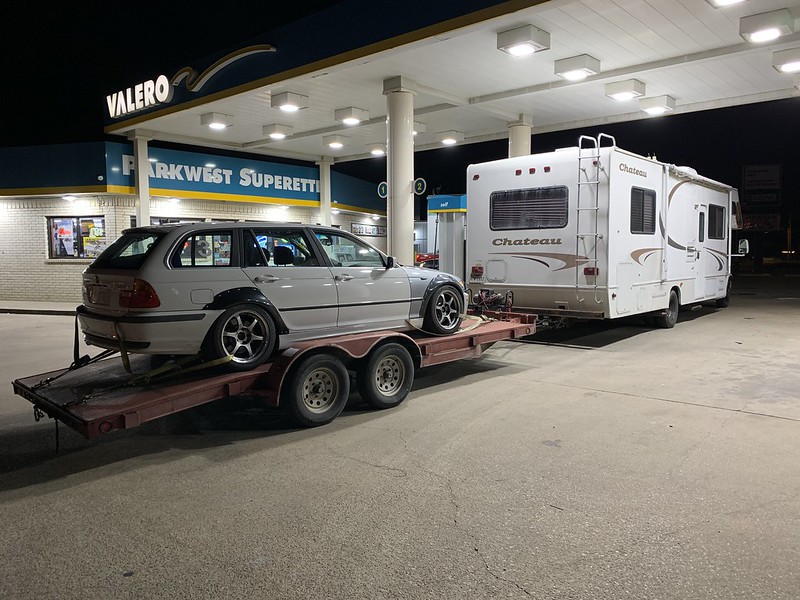 The car wasn't quite geared for the straights there as I was driving it so I just rode the limiter for a 100-200' Normally. but I decided to short shift which would then require a quick downshift back into third for the turn (T1). The clutch stop needed to be adjusted shorter and occasionally gave me some missed shifts. Combine that with a bit of a sloppy shifter/transmission caused me to mechanically overrev it once, luckily it didn't end in tears and the little 2.5L just motored on. 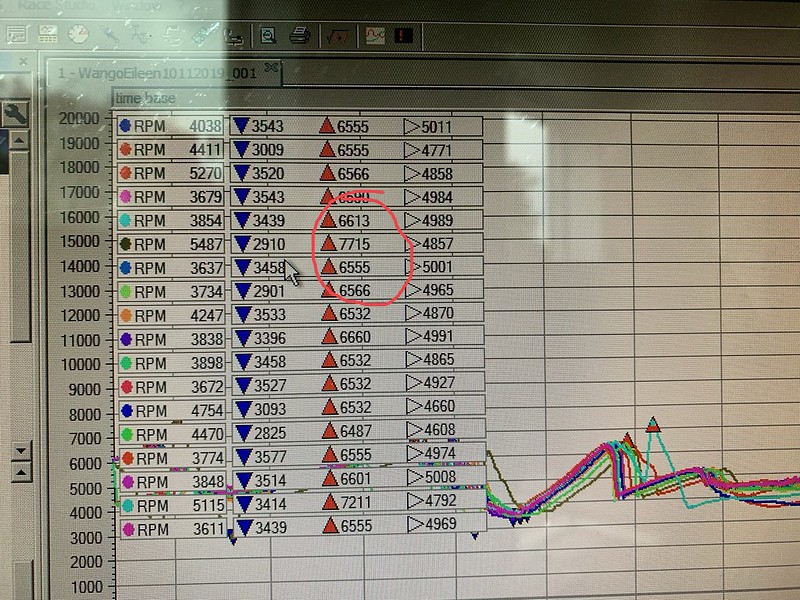 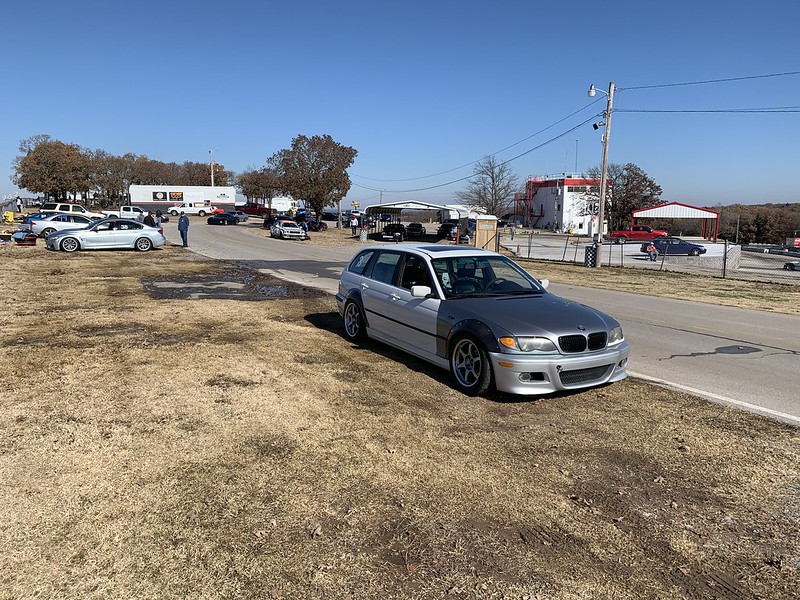 All in all no complaints! This little car rocks, can't wait to get it out on the track more. Future plans call for a swap to a 3L/ZF5spd and then more weight removal and a good set of coilovers. After that I'm just going to work on the driver mod and maybe thinking about wrapping the exterior... thinking something like techno violet, who knows though
Y

yjsaabman said:
Looks like a fun toy! You obviously don't have any kids. Lol!

Sent from my SM-G970U using Tapatalk
Click to expand...

No, we have (2) cats, motorcycles and lots of cars instead. LOL!

Little video from last weekend. For perspective, the camera car is a lightly modified F80 M3, he's running 15+/- more mph on the straights than me.

Dave said:
Eileen is not a pretty lady, but she does seem like a lot of fun...
Click to expand...

Joined Nov 14, 2008
·
304 Posts
Harris Hill, Driveway Austin, and COTA would be a lot closer than Hallet. Motorsports Ranch Houston or Cresson too.

Not that I would ever encourage anyone to bring their car out to a racetrack.
G

ewcmr2 said:
Harris Hill, Driveway Austin, and COTA would be a lot closer than Hallet. Motorsports Ranch Houston or Cresson too.

Not that I would ever encourage anyone to bring their car out to a racetrack.
Click to expand...

Yes, that is correct.
M

markseven said:
This is the only car that I think would look great in Phoenix Yellow.

He could use the Liquid Yellow from the r50/r53 MINI Coopers.

Geo31 said:
If I were wrapping a track car, for fun I'd have it done in the Alexander Calder Art Car livery.
Click to expand...

I was also thinking Harlequin E46, like the mk3 VW Golfs.

Great project and awesome video - that 'ol girl is a ripper! A perfect example of Colin Chapman's ethos "Adding power makes you faster on the straights. Subtracting weight makes you faster everywhere."

I kind of like the car in its current "livery"...however a great color would be something a bit more vintage; Golf or Inka. Either that or something off the wall ...inspired by the newer Notarzt (Emergency Doctor) livery with your Hill Performance logo.

Joined Apr 14, 2005
·
551 Posts
If I could only pick one color for a car forever it would be white, but since this is my fun car I'm feeling like doing something a bit over the top so to speak. I've always been a fan of the bright colors of the M cars from the 90s and that has led me to these choices. To me I don't think there are many colors that really highlight the Euro flare like Techno Violet, Estoril Blue, Dakar Yellow, or going back to the 2002s with Inka Orange or one of my newer favorites Imola Red, Java Green and Signal Green.

But the car is also going to be a rolling test bed for my shop whether its testing knowledge or parts so some kind of livery that is more in line with my shop is a possibility too. Thats the good thing about a wrap, I can always change it